On October 5, I led a group of my students on a field trip to see a Viking ship in the Chicago suburbs. Yes, there is a Viking ship here in the Midwestern United States! Who knew?

The trip was open to students from my Norse religion class at Carthage College, members of the Carthage College Tolkien Society I started last semester, and students from my class at Chicago's Newberry Library on "The Hobbit: J.R.R. Tolkien's Mythic Sources." Considering how far out in the Western Lands the ship is currently kept, we had a good number of people who made the trek.


The Viking is a 19th-century replica of the ancient Gokstad ship. The original ship was built in the mid-9th century and used for a ship burial around 900. The replica that we visited was built in Norway at the Framnæs Shipyard in Sanefjord between 1892 and 1893.

In 1893, the Viking was sailed by Captain Magnus Andersen and his eleven-man Norwegian crew across the wide Atlantic Ocean from Norway to the United States. The ship made stops in Newfoundland and New York City before traveling via the Hudson River, Erie Canal and Great Lakes to Chicago for the World's Columbian Exhibition in Chicago. Sailing from Bergen, Norway to Newfoundland took twenty-eight days on the open sea. The Chicago Tribune reported that the 4,800-mile journey from Bergen to Chicago took more than two months in total.


Our tour guides were Ken Nordan and Andrew Woods, both members of the Board of Directors of the Friends of the Viking Ship. Last semester, Ken was an adult student in my Newberry Library class on "Norse Mythology: Exploring the Eddas." Both guides were very knowledgeable about the history of the Viking and of the original Gokstad.


My favorite story of the tour was about the crew of the Viking getting a little drunk while stopping over in New York in 1893. They somehow ended up in a discussion with a group of Italian-American police officers on the competing claims of Leifr Eiríksson and Christopher Columbus to "discovering" the Americas. Unsurprisingly, this turned into a street brawl and the sailors ended up temporarily in jail. They were only recently officially pardoned for their "crimes."


The original Gokstad ship was 76.5 feet long with a 7.5-foot beam and measured 6' 4" from the bottom of its keel to its midship gunwale. The keel was 57' 9" and made from a single timber of oak. Gwyn Jones describes the construction of the ship in A History of the Vikings (1968/1984):


The strakes were joined together by round-headed iron rivets driven through from the outside and secured inside by means of small square iron plates. The caulking was of tarred animal hair or wool. The hull was kept in shape by nineteen frames and cross-beams. The decking of pine, in this case loose so that the space beneath could be used for storage, was laid over these beams. The strakes below the waterline were tied to the frames with spruce root lashings, a device which contributed much to the ship's flexibility. This was still further increased by a carefully systematized trenailing of the above-water strakes to wooden knees and cross-beams or, in the case of the top two, to half ribs secured to the strakes below and butted into the underside of the gunwale.

The draft of the Gokstad (the distance from the waterline to the bottom of the keel) was only 3.5 feet, which meant that it could easily be piloted up most rivers and dragged onto beaches without piers or harbors. The 19th-century Viking was modeled carefully on this ancient ship, and many of the elements described above are clearly visible (and labeled) in the photographs I took during our visit.


Click on these pictures to see larger images of the Viking's interior construction: 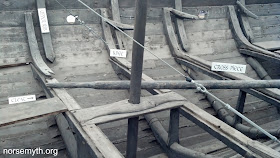 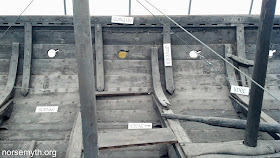 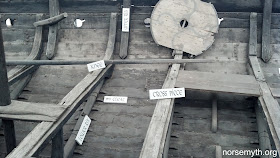 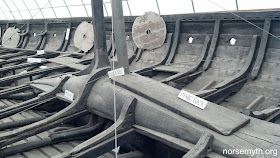 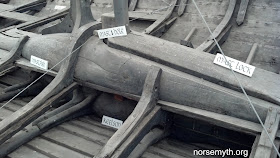 The Gokstad was made almost completely of oak, with sixteen pairs of pine oars designed with various lengths so that they would hit the water in unison. The oar-holes could be closed when not in use. The mast was also of pine and was approximately thirty feet tall, with a heavy woolen sail about twenty-three by thirty-six feet. When not in use, the mast could be taken down and secured to the t-shaped wooden supports in the middle of the ship.


The Gokstad was steered with a side-rudder attached to the starboard rear of the ship. According to Jones, Captain Andersen was particularly impressed by the ease of steering during his journey in the Viking. The rudder was


a singularly effective instrument pronounced by Magnus Andersen to be one of the clearest proofs of northern shipbuilding skills and seamanship. On his Atlantic crossing he found it satisfactory in every way, decidedly superior to a rudder on the sternpost, and manageable by a single member of the crew in any weather with just one small line to help him.

This device is at the root of the word starboard, which now means the right side of a ship – that is, where the steer-board is attached. As Ken explained during the tour, port (meaning the left side of a ship) is the side that you tie to the port when docking – on the opposite side from the steer-board. Make sense?


The Gokstad was used as a burial ship around the year 900 and was excavated from its mound in 1880. The barrow of blue clay had preserved the ship for nearly 1,000 years. The remnants of thirty-two shields were found in the ship – two for each oar-hole. The burial also contained remnants of the sail, oars, spars, and kegs for food and drink.


A burial chamber with a raised bed had been built in the rear of the Gokstad and covered with birch-bark. Scraps were found of what must have originally been rich woven hangings of silk and gold on the inside of the chamber. According to the website of the Museum of Cultural History in Oslo that describes the burial,


The skeleton shows that he was a man in his 40s, of powerful build and between 181 and 183 cm tall [approximately 6 feet]. Signs of cutting blows to both legs indicate that he died in battle. A cut to the right shin bone shows that he would not have been able to stand upright, but a knife wound to the inside of the right thigh indicates the probable cause of death. Striking at the legs was a common fighting technique in Viking times and the middle ages.

The dead man must have been shrouded in a sewn-up costume when he was buried. His weapons and jewellery are gone. There were probably grave robbers here as early as Viking times, but far from everything is gone. A game-board was found, with pieces made of horn, as well as fish hooks and harness tackle of iron, lead and gilded bronze, 64 shields, kitchen equipment, 6 beds, 1 tent and a sledge. Also with him in the grave were 12 horses, 8 dogs, 2, goshawks and two peacocks. Three small boats were also found in the burial.


After the 1893 Exposition, the Viking sailed down the Mississippi to New Orleans and back up again to Chicago. It was then donated to the Field Columbian Museum (now the Field Museum of Natural History) and moored in the Jackson Park Lagoon before being set in dry dock next to the museum. Unfortunately, it was not properly preserved and soon started to deteriorate.


In 1920, the ship was restored by the Federation of Norwegian Women's Societies and moved to Lincoln Park. Although kept under a wooden shelter, it continued to be damaged by changes in temperature and humidity. When the Lincoln Park Zoo was expanded in 1994, the ship was moved to its current location in Good Templar Park in Geneva, Illinois. It is now protected by a shelter of metal and fabric, yet still subject to temperature changes.


In 2007, due to the ongoing environmental threats to the ship, Landmarks Illinois declared the Viking display one of the ten most endangered historic sites in Illinois. Thankfully, a $52,000 grant in the same year enabled stabilization work to be done to the ship in 2008.


In 2012, trusteeship of the Viking was transferred from the Chicago Park District to the Friends of the Viking Ship, the group that now cares for the ship and gives presentations to visitors. The ship's dragon-head and dragon-tail are currently in storage at Chicago's Museum of Science and Industry, where they will remain until a climate-controlled home can be built for the ship.


The Friends of the Viking Ship are working to raise funds for the preservation of the ship, including the building of a permanent housing and reconstruction of missing items. Thousands of rivets still need to be cleaned and treated with preservative. You can learn more about the ship and make donations at the Friends of the Viking Ship website. You can also become a Friend of the Viking Ship, plan a visit to the exhibit and learn more about Viking ship construction methods. There is also a call out to anyone who may have information about items that have gone missing from the ship over the last hundred-odd years. Do you have a Viking shield in your basement?


The next field trip I'll be taking my students on is to the J.R.R. Tolkien Archive at Marquette University in Milwaukee to see the manuscripts of The Hobbit and The Lord of the Rings (along with Tolkien's original maps and illustrations). If you're interested in signing up for a future public course, please click the "Join this site" button in the right-hand column at The Norse Mythology Blog and keep an eye on the website's classes page!

After the Viking ship field trip, we all had a nice big pizza lunch in Batavia, Illinois. One of my students noticed this sticker on the back of a sign next to the bridge over the Fox River. Extra credit points if you can read the runes rightly!

My students all swear they didn't put the sticker up.

Including the ones from the Tolkien Society.

I didn't do it, either. Pinky swear.